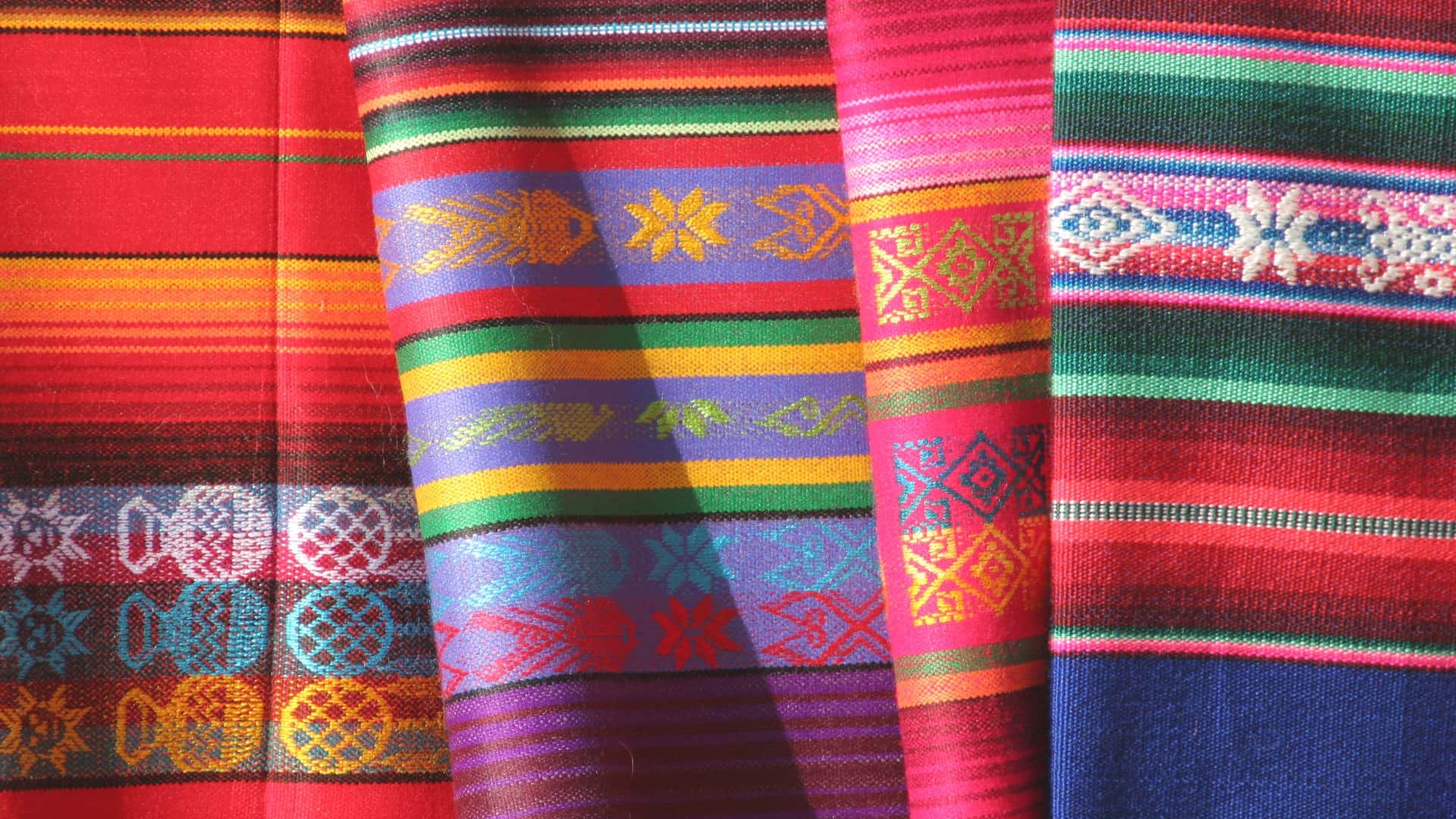 East by Northeast to Pecos and Las Vegas

This day trip takes you to the “Other Las Vegas” along the historic Old Santa Fe Trail. 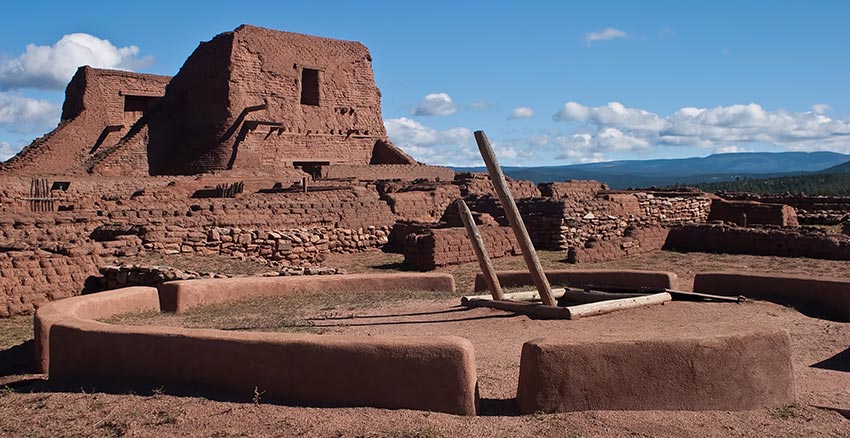 On the way to Las Vegas going North on I-25, visit the Pecos National Historical Park. The Pecos Wilderness includes the southernmost extension of the Rocky Mountains in the sub-range of the Sangre de Cristo Mountains of north central New Mexico. One trail head for the wilderness is only 15 miles by road from Santa Fe. The scenery varies from 100-foot-drop waterfalls, dramatic rock cliffs, towering peaks, and wildflower meadows best caught in July and August.  Wildlife sightings can include elk, deer, bear, turkey, and one of America’s healthiest herds of Rocky Mountain Bighorn Sheep.

Fishermen will find excellent fly-fishing along the Pecos River which originates high up in the Pecos Wilderness Area of the Sangre de Cristo Mountains. The Pecos River has brown and rainbow trout as well as the Rio Grande Cutthroat Trout, New Mexico’s state fish! The river fishes well before the spring runoff and fishing picks up again and is good throughout the summer and into fall.

In the midst of piñon, juniper, and ponderosa pine woodlands in the Sangre de Cristo Mountains 2 miles south of the town of Pecos on NM 63, the remains of Indian pueblos stand as meaningful reminders of people who once prevailed here. Now a national historical park and visitors center demonstrates to modern visitors the cultural exchange and geographic facets central to the rich history of the Pecos Valley. Pecos National Historical Park protects the ancient pueblo of Pecos, the Pecos Pueblo Mission Church, the Glorieta Pass Battlefield, site of the American Civil War Battle of Glorieta Pass, as well as a stretch of wagon ruts along the old Santa Fe Trail and the Forked Lightning Ranch home designed by John Gaw Meem for Tex Austin and later occupied by Greer Garson. Some of the grounds are available only by guided tours.

Nestled between high red sandstone bluffs that form a canyon along the Pecos River, near the picturesque Spanish-colonial village of Villanueva, lies Villanueva State Park. Camp or picnic under the shade of cottonwood trees. Enjoy fishing, birding, wildflower viewing, or hiking the trails along the canyon walls.

The historic town of Las Vegas was a major trading stop along the Santa Fe Trail. The town was laid out in the traditional Spanish Colonial style, with a central plaza surrounded by buildings which could serve as fortifications in case of attack. The arrival of the railroad in 1879 brought along with it noted opportunists and outlaws. As you sightsee along historic streets and Plaza Park, you can almost sense the hustle and bustle of a town that was a major trading stop on the Santa Fe Trail. While things have quieted down a bit, you can imagine the likes of Billy The Kid, Doc Holliday, Wyatt Earp and other notorious folks wandering the streets. The City of Las Vegas Museum and Rough Rider Memorial Collection is a great place to explore Las Vegas’ unique history. The historic Plaza Motel was a shooting site for the movie “No Country for Old Men.”

Six miles west of Las Vegas is the United World College USA in Monetezuma, NM. Founded in 1982 by Dr. Armand Hammer, the school offers an International Baccalaureate Diploma Program.   Prominent on campus is The Montezuma Castle. A 90,000-square-foot, 400 room Queen Anne-style building originally constructed by the Atchison, Topeka & Santa Fe Railroad as a luxury hotel. Also on campus is the Dwan Light Sanctuary.

The Dwan Light Sanctuary was designed by Virginia Dwan, Charles Ross, and Laban Wingert in 1996. The circular building features 12 large prisms in the apses and ceiling, which spread rainbows across the floor and walls of the interior. The Light Sanctuary has served the UWC-USA campus and the public as a quiet place for reflection. Visit during the day to take full advantage of the sunlight filtering through the prisms. Because the Light Sanctuary is located on a private campus, visitors should stop at the Welcome Center to register and receive a visitor’s pass.

Twenty-eight miles north of Las Vegas, exposed to the wind, within a sweeping valley of short grass prairie, amid the swales of the Santa Fe Trail, lie the territorial-style adobe remnants of the largest 19th century military fort in the region. For forty years, 1851-1891, Fort Union functioned as an agent of political and cultural change, whether desired or not, in New Mexico and throughout the Southwest. Its mission was to protect the Santa Fe Trail and serve as a major Army supply depot in the Southwest. Fort Union National Monument is located in the Northeastern portion of the state of New Mexico. 8 miles off of InterstateI-25 on State Highway NM 161. There is a visitor center with exhibits about the fort and a film about the Santa Fe Trail. A 1.2-mile trail winds through the fort’s adobe ruins.

Traveling Back to Santa Fe

You can return to Santa Fe via I-25 or if time permits, take NM 161 to NM518 through Mora and then to NM 78 through Peñasco and Dixon connecting with NM 68 (the Low Road from Taos). The drive north of Mora is very scenic. You will see many picturesque villages, and old adobe churches. A portion of this area was settled by Basques, so sheep ranching is common. During the summer and fall months, look for family fruit stands along this road to purchase apricots, plums and apples. If you’re lucky, you’ll find some chokecherry jelly. 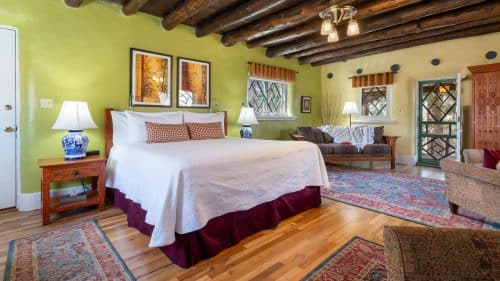 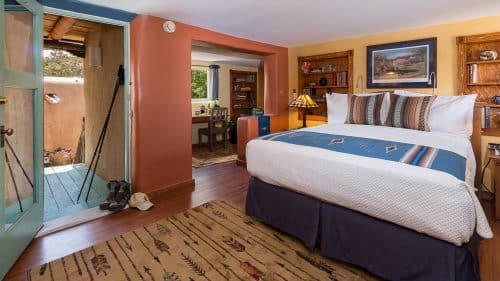 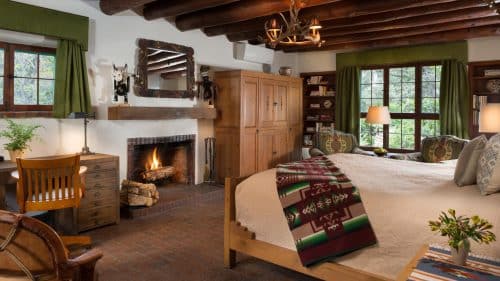 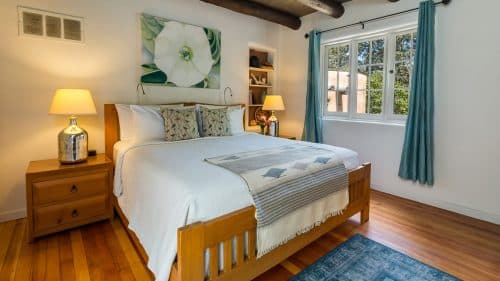 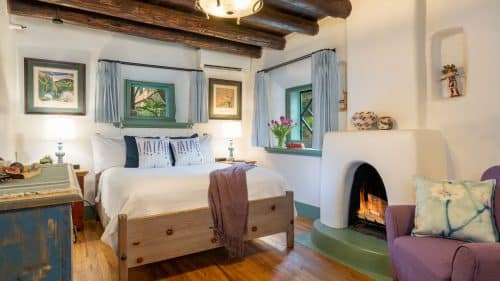 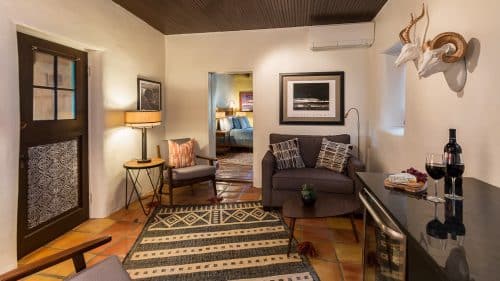 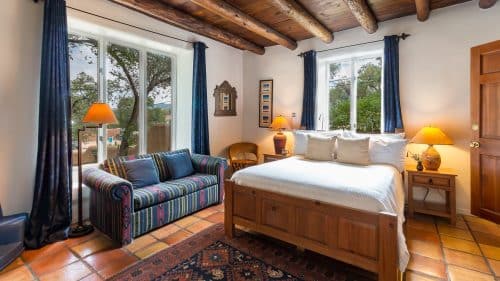 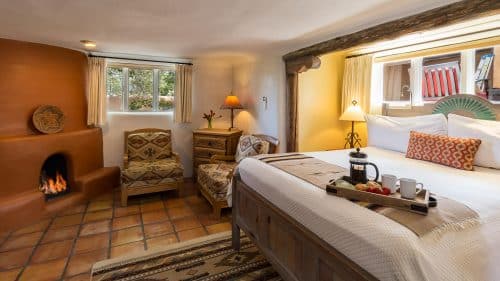 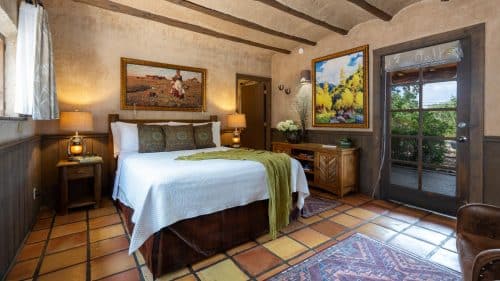